The Shamanic drum maker builds not only a physical object, but a character web (morphogenetic or telesmatic field) that keeps the drum focused on it’s created purpose, and a drum spirit incarnates into a drum that matches that spirit’s life purpose.

The drum is the principal vehicle the shaman rides across the dimensions.
There are many existing theories as to how the Shamanic Drum alters consciousness:
*    Association with the mother's heartbeat in the womb
This theory would suggest the instinctive mind has the archetype triggered of the journey in the womb towards life, and the lighted spaces within the Labyrinth in which we journey are morphologically similar to lifetimes and the learnings of each.
*    High component of Delta brain frequencies
The Delta brain frequencies are between ½ Hz to 4Hz, and commonly occur during deep hypnosis accompanied by strong visualizations, and various other deep states of consciousness, including Superlearning states, where music is played at 1Hz to enhance learning,. The rhythm of the shamanic drum is within this frequency, and a good shamanic drum also emits a high component of such frequencies. Such frequencies are not in the theoretical range of human hearing, but they do have many strong effects upon the human body.
*    Drowning out regular senses by overloading
The “rational” self is a web of almost unlimited fixed ideas that bear little relationship to present reality. So some means of drowning this out can be vital to explore different and more useful ideas. A monotonous drum beat can be very effective for this.
*    Resonance with electromagnetic pulses of the Earth
Each lightning strike reverberates around the Earth several times, and in every instant, lightning is always striking somewhere. This is a continual resonance, and a skilled Shamanic drummer will easily beat exactly in time to this rhythm.

Shamanic Life of the Drum 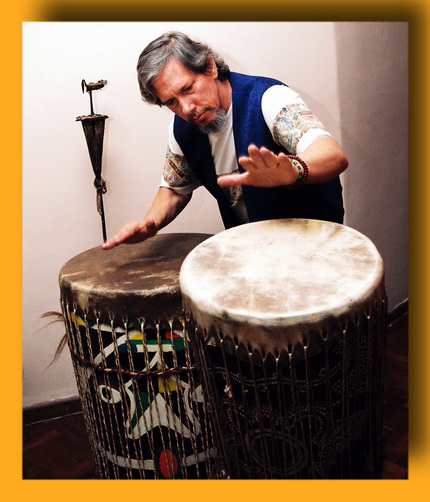 These theories, however correct they all my be, leave out the Shaman's and the drum's realities: that the drum is alive, sentient, and is professional in carrying out his job in transporting the Shaman. The Shamanic drum maker builds not only a physical object, but a character web that keeps the drum focused on it’s created purpose, and a drum spirit incarnates into a drum that matches that spirit’s life purpose.

Even if a particular drum was not fully alive as an individual consciousness, the principle of morphological resonance between the character of the drum and the intentionality of the drummer, is a much more significant factor than all merely mechanical factors. The fact that Shamanic drumming has already evoked ecstatic consciousness shifts for thousands of years, means that when a Master Shaman drums, all those who have drummed before him, stand behind and drum. Those thousands past, present and future drummers from across the ages, all focused into a present moment, can easily carry a roomful of trainees into trances in seconds.

Powerful drumming is best with a male/female pair of Shamans, each experiencing their drum as macrodimensional, and the room they are in as being contained microdimensionally within each of their drums. This  begins the Shamanic Journey fourth-dimensionally, or with three drummers each with awake drums, starting in fifth dimension .....

The first time I experienced the presence of a Stradivarius violin was entering an elevator. I saw a man with an oblong case, and even though I didn't know violin cases could be oblong, I went into awe, a state of absolutely stunned amazement at the power of his violin, hardly able to stand up near it. Getting upstairs, we went into the violin makers where I worked, and he took out a Stradivarius, now worth $6,000,000.

Intentionality of a master craftsman, and audiences over a period of centuries enhancing that energy, creates a powerful energetic aura around a master instrument.

I have had relatively conservative psychologists, with no knowledge of Shamanism, spontaneously go into "daydreaming" and imagining my drum talking with them, and explaining its job to them.  The interesting part is how similar their "imagined" explanation was to how Samuel Oshodi, the drum's Nigerian maker described its function to me. This happened one time when it was officially an Ericksonian Hypnotherapy workshop, and I hadn't even played the drum. I guess she didn't want to be only an audience, so she thought she'd teach the students as well as me!

The drum comes alive as an individual soul as when the soul enters the child in the womb: when it starts drumming, kicking in its own rhythm. The soul incarnated in the drum during its making. Some students ask questions like "Do the straps connecting the skins represent the dimensions?" The consciousness of the drum is way beyond "representation". If while spinning the straps for the drum, one's consciousness is in nine dimensions, they don't represent those 9 dimensions, they are in 9 dimensions, and can carry people there.

Function of Drum Beats
For most Shamanic journey and training purposes, we only use 3 simple beats. A monotonous beat about 4 Hz for most journeys, a monotonous beat at around .9 Hz for some power journeys, and a heartbeat for more heart or Great Mother oriented Journeys.

For calling in certain Orishas or powers of nature there are also a variety of rhythms, each calling the power to us.
And then my drum responded: "All the above theories about how I function are simultaneously true, yet all have the same logical flaw of most human perception: anthropomorphisation, thinking the world is about yourselves. The theories all say something that happens in your own biological makeup, dismissing non-human consciousness as irrelevant.

Contained within each of my molecules is a reflection of the Future Self of all in the room journeying upon my sounds. As my ecstasy rises, I leap open with joy into the next dimension and the next, yearning, calling, summoning your own power to your own body. I call your blockages and limitations to be sacrificed on the altar of Olokun, the most mysterious and deep dark and ancient Goddess, for I have the sacred task of revealing you to you! Oh how I love to play the drummer as the drummer plays me!

The air within me is tuned to the pulse of the universe, my wood to your bones, and my skins to the dance of life within your blood, and the cords holding my skins in perfect resonant tension sing within your Spiritual DNA Strands, that which links your consciousness between the dimensions."